In an article by Huffington Post contributor Michelle Fields, the author claims that there are a number of women who have been victims of Roger Ailes supposed sexism, including Gretchen Carlson, who has filed a suit against Ailes.

While Fox News certainly has gone more blonde, with shorter skirts, The Huffington Post is, by contrast, dominated by a group of young white women who are progressive “feminist” frauds, whose calls for “equality” (considering the lack of men or women of color in editor positions) are quite the ruse. 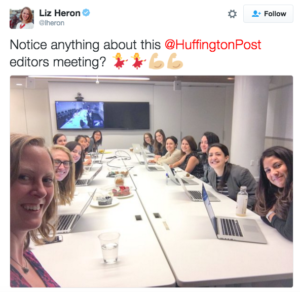 Michelle Fields, the writer of the story, was the woman who falsely accused Trump’s campaign manager, Corey Lewandowski, of assault while at a campaign event in Jupiter, Florida.

Fields left Breitbart in order to court a job at Fox News, who let her go when they found out she was a phony.

Gretchen Carlson, the former co-host of Fox & Friends who filed a sexual harassment lawsuit, was a model and Miss American pageant winner, and still works with the pageant where they undoubtedly have women show their “posterior” as well.