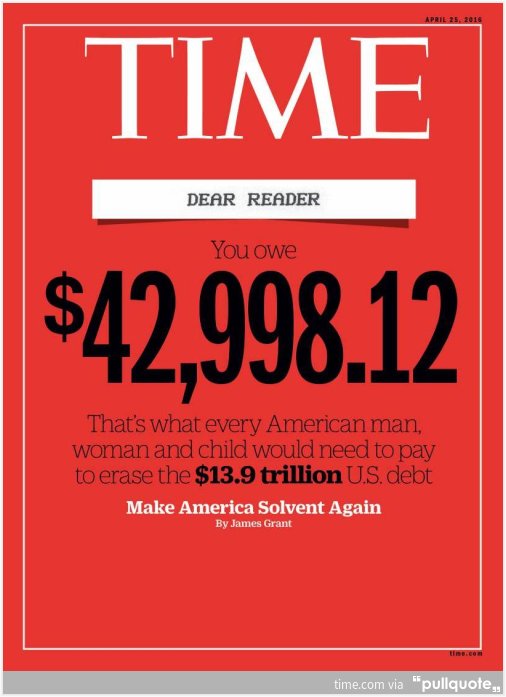 In the increasingly polarized debate about the state of the economy, mainstream economists continue to claim that the economy is sound, while shunning all skepticism.

In the April 14 issue of Time, financial commentator and historian James Grant wrote the cover story entitled “The United States of Insolvency” where he demonstrated his skepticism of the claim that the economy is sound, and professed his ideas about how to “Make America solvent again.”

James Grant is the editor of Grant’s Interest Rate Observer, as well as a respected historian and economist. He has recently received additional notoriety in the popular move adaptation of the book The Big Short, where he is credited with being one of the original whistleblowers of the housing crisis.

Grant pointed out on the Time cover that each American would have to pay $42,998.12 to rid the U.S. of its current debt. But this assertion have been criticized by Slate, who has described the cover story as “every bad conservative argument about the national debt wrapped into one.”

In the article, Grant explains how sound money originally “coincided with balanced budgets,” and the steps by which the government has escaped from responsibility of paying its debt.

Grant explains that the arrangement between sound money and balanced budgets was “disarranged by depression in the 1930s and war in the 1940s” and “broken by the Johnson Administration’s guns and butter and entitlements programs in the 1960s.” Until sound moneys final demise in 1971 when Nixon unpegged the US dollar from gold.

In order to make the debt more relatable to the individual, Grant explained how an individual can determine their own portion of the debt by visiting the Treasury online, which shows the current debt, then the Census Bureau online, which reports current population. After which individuals can “divide the latter by the former and you have the scary truth: $42,998.12 for every man, woman and child.”

Grant also points out how the heirs of Keynesianism and the detractors of sound money and fiscal conservatism got where they are today:

“Maybe you had a taste of modern economics in school. If so, you probably learned that the federal budget needn’t be balanced–it’s nothing like a family budget, the teacher would say–and that gold is a barbarous relic. To manage the business cycle, the argument went, a government must have the flexibility to print money, to muscle around interest rates and to spend more than it takes in–in short, to “stimulate.””

The prevalence of Keynesian theory in modern economics, especially higher education, has accustomed the public to entrust the “economists” with an exuberant debt.

Grant takes issue with those who claim to have “saved the economy” from a depression, admitting that it is “true” that our “Great Recession proved no Great Depression,” but that the massive stimulus has produced a weak recover, the “limpest on record.”

Grant also questions the strange claim that 12 month deficit calculated in January was a “mere $400 billion,” by putting it in perspective;

Too often debt is ignored, as Keynesians profess that it is of no concern to the overall health of the economy. But eventually the debt must be accounted for, and at what point does it become too much to handle? The debt is essentially a deferred tax, and sticking future generations with an unfathomable debt is the antithesis of progress.

Grant explains that debt is “neither good nor bad, though less usually better than more” but that “how it’s priced and how it’s used” are what ultimately matters. Adding that “government debt is priced at less than 2%, and Washington fell off the wagon years ago.”

While both parties have been complicit it in the growth of spending, the origins of the national debt lie in Keynesian programs run amuck. Grant makes this case by explaining that “the debt, as big as it is, is the measure of past spending in excess of tax receipts, a pattern of bad fiscal habits that traces its intellectual roots to John Maynard Keynes and has its dollars-and-cents origins with Lyndon Johnson and his Great Society.”

You actually need a special, pressure-resistant diving suit to reach these depths of stupidity https://t.co/apdjcoMNM7

Weissmann was most likely offended by the Grant’s skepticism of exuberant debt and liberal social programs. Which are of course, the spoils of Keynesianism.

Grant also criticized the cultural climate of economics, explaining that “you can’t blame people for not paying attention. America has forever defied the doomsdayers. The very language of government debt is calculated to tranquilize the critical mind.”

The mainstream ignores and discounts economists who don’t fit the narrative of the establishment, often to the detriment of American citizens. By silencing economic criticism, our financial system has put blinders on as it races to the bottom of a black hole from which it cannot return.

Former Presidential candidate Ron Paul touted Grant as his choice to replace Ben Bernanke as Chair of the Federal Reserve. Paul has been the pioneer in the political opposition to Keynesianism, and has been largely exiled from the mainstream for precisely this reason.

Economist Peter Schiff was an advisor to Paul during the years leading up to the housing crisis, where they both accurately predicted the housing crisis while being laughed at by the media. Paul, Schiff, and Grant have been an outspoken critics of the Fed for many years, and are often shunned as a “doomsday economists.”

The mainstream has a history of ignoring anyone who doesn’t drink the Keynesian Kool-Aid, but that history doesn’t bode well for anyone that isn’t “too big to fail.”

It was “fringe” economists like Paul, Schiff, and Grant that identified and addressed the housing bubble in 07-08′. But now, as the debt quickly becomes unfathomable, mainstream Keynesian economists seem to be in a bubble of their own.

11 thoughts on “The State of the Economy”